The Maknaz edition of the famous and authentic hadith collection known as Sahih Muslim is considered to be one of the best ever printed editions with meticulous attention to detail given when typesetting and the minimisation of errors when producing the final edition from the manuscript(s) used.  The above slideshow picture is from the opening lines to the introduction (muqaddima) to Sahih Muslim by the compiler, Imam Muslim ibn al-Hajjaj (d. 261 AH) dated 842 AH/1438 CE.

The printed edition found below was certified by the premier institute of Sunni Islam, al-Azhar University in Cairo, Egypt.  Some details from the publishers:

“A full-time team of qualified Hadith specialists has been working on the creation of a properly-edited and reliable text. Further, the process has benefited from the guidance of living Hadith authorities. The result has been the first critically-edited versions of the Hadith literature ever produced.

This long overdue scholarly production has met with acclaim and admiration from Hadith specialists around the world and opens new possibilities for research into early Islamic history, into Arabic literature, and into the complex disciplines of Islamic doctrine, law, and spirituality.” 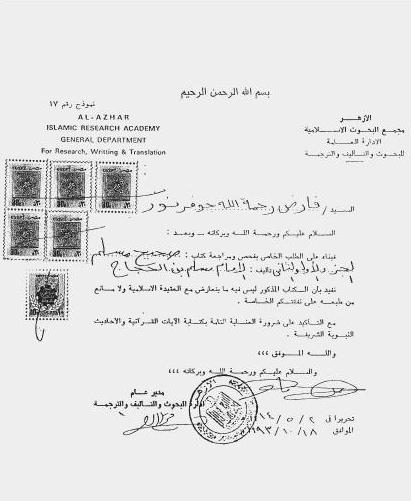 DISCLAIMER – The digital version of the book was not produced by this website but located in the public domain via the internet due to the  efforts of others.

The Meaning of the Glorious Qur'an - audio files

Athar as-Sunan: Traditions of the Sunnah - By Shaykh al-Nimawi