This is the most detailed work on the issue of understanding the Attributes (Sifat) of Allah via the means of Tafwid of the kayfiyya (howness) and ma’na (meaning) by Shaykh Dr.  Sayf al-Asri of Yemen. The work has been endorded by the late Senior Aqida specialist – Shaykh Wahbi ibn Sulayman Ghawiji (d. Feb. 2013, rahimahullah) of Damascus, Mufti Taqi Uthmani of Pakistan, Dr Yusuf al Qaradawi of Egypt and others. It showed via means of more than 100+ quotations from early Islam right down to this age how to understand the Attributes of Allah as the Salaf and their successors from the Khalaf understood it.

It is the best work to date in refutation of the claims of Ibn Taymiyya and his followers in this age who deny Tafwid of the Ma’na (meaning) as the way of the Salaf. This second edition also contains replies to some contemporary pseudo-Salafis that attempted to rebut the findings of Shaykh al-Asri (see the appendix) in his al-Qawl al Tamam bi Ithbati Tafwid Madhhaban lil Salaf al Kiram: 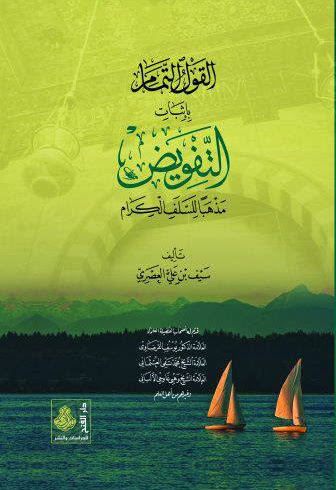 “Our saying in this and what falls under it is: Submission to the text, passing it on as it came and consigning the knowledge of its meaning (tafwidh ma’nahu) to its Sacrosanct and Truthful Sayer.”

“As for the Salaf (three earliest Muslim generations), then they did not delve into interpretation (of the Attributes), but rather they believed, refrained, and consigned the knowledge of that to Allah and His Messenger (sallallahu alaihi wa sallam).”

25 Supplications (Dua's) from the Holy Qur'an