The following is the downloadable version of al-Sharh al Kabir, being a monumental and large commentary on al-Aqida al Tahawiyya in over 1450 pages and 2 volumes, by the contemporary Sunni scholar, Shaykh Dr. Sa’id Fouda of Amman, Jordan.  This work has exemplified the true and real intent of the points made by the original author, Imam Abu Ja’far al-Tahawi (d. 321 AH), and in doing so it has also addressed certain digressive and non-Sunni explanations of the same text made by some contemporaries linked to the pseduo-Salafi sect. 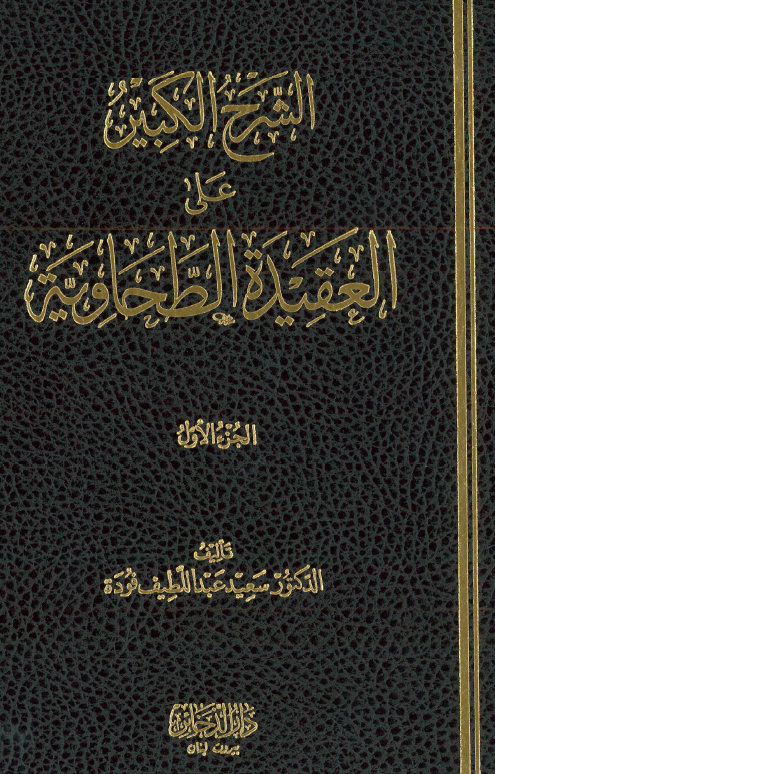 Biography of the author:

Shaykh Sa’id ‘Abd al-Latif Fouda is a leading scholar of Islamic theology [‘ilm al-kalam], logic [mantiq] and legal theory [usul al-fiqh], and one of the most meticulous experts on the creed of ibn Taymiyya and the self acclaimed Salafi sect that promotes his ideology and aspects of his creed. Shaykh Sa’id was born in 1967 CE in the city of Haifa, Palestine, and moved at a very young age with his parents to Amman, Jordan, where he still lives and teaches today.  The Shaykh’s educating began at a very early age. He first studied jurisprudence of the Shafi’i school, Arabic grammar, and read most of the Qur’an with Shaykh Husayn al-Zuhayri – may Allah have mercy upon him.
Following this, Shaykh Fouda  was sent to the expert of canonical readings of the Qur’an, Shaykh Sa’id al-Anbatawi – may Allah have mercy upon him. He memorised Tuhfa al-Atfal and al-Jazariyya with him, both in tajwid (Qur’anic elocution), and also read the Qur’an to him and heard him read it many times to his students. After this, Shaykh Fouda memorised over two thirds of the Qur’an, al-Kharida al-Bahiyya and Jawhara al-Tawhid under his tutelage. During that time, Shaykh Sa’id al-Anbatawi was not teaching the science of tawhid (Divine oneness) to anyone besides Shaykh Sa’id, because of the focus and desire his student had in that subject. Once, he bought [Ahmad] al-Dardir’s explanation of the Kharida and requested Shaykh Sa’id to summarise it so it could be of some benefit to the students. By Allah’s grace, Shaykh Sa’id did that and presented it to his teacher who then requested that he start teaching it to the students of knowledge. Under him Shaykh Sa’id also studied the basics of the recitation of the warsh canonical reading by memorising some small didactic texts, and read Sura al-Fatiha, al-Baqara, and the beginning of Sura Aal-Imran to him in warsh.
Shaykh Sa’id went on to meet the Shaykh Ahmad al-Jamal, who had made firm the Sunni way against those that have deviated from it. Under him, Shaykh Sa’id studied approximately three fourths of the Kitab al-Ikhtiyar of al-Mawsili in the tradition of the Hanafi school of Law.
From amongst his other teachers are the former  (late) Mufti of Jordan, Shaykh Nuh ‘Ali Salman al-Qudah, with whom he had studied parts of the Sharh al-Minhaj of Imam al-Nawawi.
Shaykh Sa’id also met the verifying scholar, Shaykh Ibrahim Khalifa who is well versed in the sciences of tafsir (explanation of the Qur’an), usul al-fiqh (legal theory), logic, rhetoric, and grammar upon the way of the early scholars. He has given the Shaykh an ijaza (formal authorisation) in numerous sciences such as tafsir, the explanation of Hadith, the science of tawhid and its major works, the science of usul, logic, rhetoric, and other sciences. He said that he had not given an ijaza of its likes to anyone before him. In this ijaza, he ordered Shaykh Sa’id to stand against the innovators and those that oppose the People of the Sunna.
There are many other Shaykhs that Shaykh Sa’id has met and has a strong connection with such as: Shaykh ‘Abd al-Hadi Kharsa and Shaykh Adib Kallas – may Allah have mercy upon him – in Syria, Shaykh ‘Abd al-Qadir al-‘Ani (from Iraq) – one of the students of Shaykh ‘Abd al-Karim al-Mudarris – may Allah have mercy upon him, the  (ex)Mufti of Egypt, Shaykh ‘Ali Jum’a, Shaykh ‘Abd al-Ba’ith al-Kittani and Dr. ‘Umar Khalil. He has also met the virtuous Shaykh Muhammad Salih al-Gharsi of Turkey and had written correspondence with the late Shaykh Wahbi al-Ghawiji of Syria who lauded him and his works and requested that he write some books in defence of the way of Ahl al-Sunna and refute some who have attacked Imam al-Razi. (Adapted from the biography in the English edition of The Sanusi Creed)

The Magnificent Quran: A Unique History of Preservation