The following work by Dr. Hussain Ahmed is an investigation and verification of where the hands should be placed in Salah according to the dominant and dependable view of the Hanbali Madhhab, as well as the acceptable positions emanating from Imam Ahmed Ibn Hanbal (d. 241 AH). It is in essence a comprehensive academic rejoinder in excess of 150 pages to a 10-page piece entitled: ‘Looking at the Hanbalee Text al-Khiraqee and Placing the Hands On The Chest’, by two opponents of the Taqlid of any of the four Sunni Madhhabs, namely, Abu Hibbaan Kamran Malik and Abu Khuzaimah Imran Masoom, both from Birmingham, England.

The named duo attempted to endorse their personal view that the hands are to be placed upon the chest only in Salah, and they claimed that the chest refers to the part of the body that is literally above the navel and below the neck. They also attempted to pass off their assertion that Imam Ahmed Ibn Hanbal would also place his hands upon the chest in Salah. This latter view was also propounded by their late authority in Hadith known as Shaykh Badiud-Din Shah al-Rashidi al-Sindi (d. 1416 AH/1996 CE) of Pakistan.

The duo being retorted to also endeavoured to demean the dynamics of the Sunni-Hanafi Madhhab, as well as attempting to intersperse their own selective hermeneutics of some of the Hanbali texts that they brought forth as part of their discourse. The response also contains a host of additional information on the authenticity of some of the narrations that they either weakened or attempted to promote.  One of the main findings in the riposte was the establishment of the fact that Imam Ahmed Ibn Hanbal actually disliked (makruh) that the hands should be placed on the actual chest region.

This work has also presented probably for the first time in the English language some narrations and quotations translated from original Arabic sources that is also probably unknown to many Arabic speaking scholars who have either written or read up on this matter at hand in this era.

A LOOK AT SOME OF THE EVIDENCES THEY MENTIONED FROM HADITH BOOKS. 22

A LOOK AT THE AUTHENTICITY OF THE NARRATION FROM WA’IL IBN HUJR (ra) FOR PLACING THE HANDS ON THE CHEST AS IN SAHIH IBN KHUZAYMA. 28

SALAFI TYPE WRITERS WHO WEAKENED THE HADITH OF WA’IL (RA) FOR PLACING THE HANDS ON THE CHEST AS IN SAHIH IBN KHUZAYMA. 33

Imam Sufyan al-Thawri’s madhhab was to place the hands under the navel in Salah according to some well-known Salafis: 45

A CHALLENGE FOR THE LOYAL READERS OF AL-ALBANI’S SIFATUS SALAH.. 51

SCHOLARS WHO AUTHENTICATED THE ATHAR (REPORT) OF ALI (ra) OR ABU HURAYRA (ra) FOR PLACING THE HANDS BENEATH THE NAVEL IN SALAH.. 70

A LOOK AT THEIR EARLIER SUPER CLAIMS ON IMAM AHMED IBN HANBAL AND WHERE THE HANDS SHOULD BE PLACED IN SALAH.. 99

IMAM AHMED IBN HANBAL AND WHERE THE HANDS SHOULD ACTUALLY BE PLACED IN SALAH.. 108

WHAT THE STUDENTS OF IBN HANBAL REPORTED FROM HIM ABOUT THE POSITION OF THE HANDS IN SALAH.. 129

The report from al-Fadl ibn Ziyad. 129

The report from Abu Dawud al-Sijjistani 131

The report from Abu Talib. 131

The report from al-Muzani 132

WHAT THE STRONGEST VIEW IS IN THE HANBALI SCHOOL ON THIS MATTER.. 135

PROOFS FROM HANBALI, SHAFI’I AND MALIKI WORKS THAT ABOVE THE NAVEL MEANS UNDER THE ACTUAL CHEST: A REPLY TO BADIUD-DIN AL-SINDI AND HIS ADVOCATES. 148

Some quotes in demonstration of the demarcation of the chest from that which is known as below the chest but above the navel from the Hanbali, Maliki and Shafi’i Madhhabs. 149

A COMMENTARY ON MUKHTASAR AL-KHIRAQI NOT MENTIONED BY THE TWO BLOGGERS AND WHAT IT STATED.. 156

THE STANCE OF THE MAJOR TABI’I IMAM: SA’EED IBN JUBAYR ON PLACING THE HANDS ON THE CHEST AREA AS REPORTED BY IMAM AHMED IBN HANBAL AND IMAM ABDAR RAZZAQ AL-SAN’ANI 160

IJMA (CONSENSUS) ON FOLLOWING ONE OF THE RECOGNISED SUNNI MADHHABS. 166 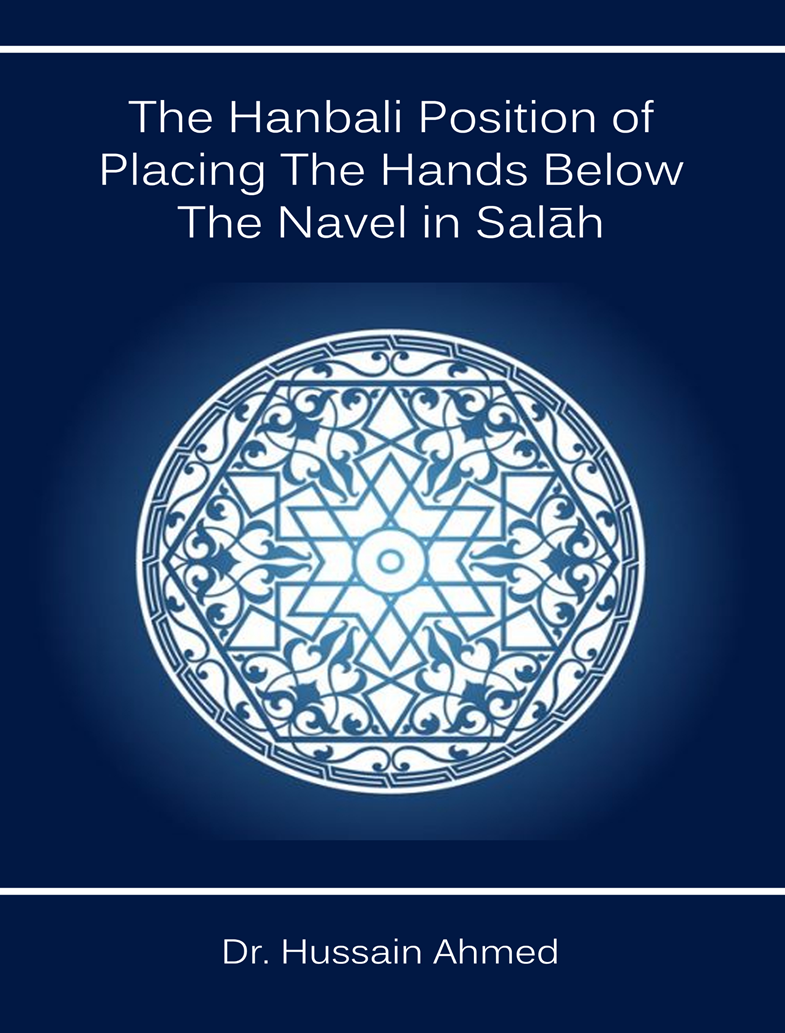 An Explanation of the Principle, “Jarh is Given Precedence over Ta‘dīl”

The Isnād System: An Unbroken Link to The Prophet