This book discusses the methodology and literature of ahadith. It is divided into 2 parts, part 1 deals with the methodology of the hadith, and the second part discusses the literature, introducing the  principal books, as well as others which had great significance and represent a stage in the compilation of Hadith books. The author hopes that through careful reading, it would eliminate most of the doubts which have been created, deliberately or out of ignorance, by Orientalists and others and would provide basic knowledge of the subject.

Professor Muhammad Mustafa Al-Azami, one of the world’s premier scholars of Hadith, was born in Mau, India in the early 1930s and received his education successively at Dar al-Ulum Deoband, India (1952), al-Azhar University, Cairo (M.A., 1955), and University of Cambridge (Ph.D., 1966). He is Professor Emeritus at King Sa’ud University (Riyadh) where he also chaired the department of Islamic Studies; he holds a Saudi citizenship. Al-Azami served as curator of the National Public Library, Qatar; Associate Professor at Umm al-Qura University (Makkah); Visiting Scholar at University of Michigan (Ann Arbor); Visiting Fellow at St. Cross College (University of Oxford); King Faisal Visiting Professor for Islamic Studies at Princeton; and Visiting Scholar at University of Colorado (Boulder). He is also an Honorary Professor at University of Wales (Lampeter). His publications include Studies in Early Hadith Literature, Hadith Methodology and Literature, On Schacht’s Origins of Muahmmadan Jurisprudence, Dirasat fi al-Hadith an-Nabawi, Kuttab an-Nabi, Manhaj an-Naqd ‘ind al-Muhaddithin, and al-Muhaddithun min al-Yamamah. Among his credited works are al-Ilal of Ibn al-Madini, Kitab at-Tamyiz of Imam Muslim, Maghazi Rasulullah of Urwah ibn Zubayr, Muwatta Imam Malik, Sahih ibn Khuzaimah, and Sunan ibn Majah. Many of al-Azami’s works have been translated internationally, and his forthcoming works include The Qur’anic Challenge: A Promise Fulfilled, and The Isnad System: Its Origins and Authenticity. In 1980 he was the recipient of the prestigious King Faisal International Award for Islamic Studies. 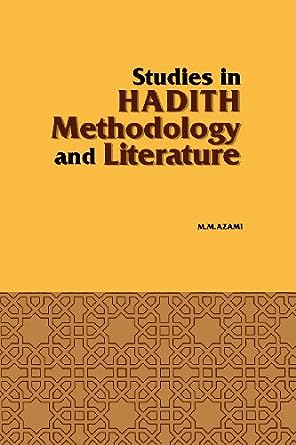