It is known among those who read Shaykh Albani’s books in Arabic that he contradicts himself when grading hadith. He may grade a hadith weak in one of his books but then we will find the exact same hadith declared authentic in yet another one. Here is an example: ‘Uthman (ra) reported: I heard the Messenger of Allah (pbuh) saying: “Spending a day on the frontier in Allah’s way is better than one thousand days in any other place.” -In his editing of  Al-Mishkah, Shaykh Albani said, “It is narrated with a chain containing an unknown (majhool) narrator (i.e., it is weak).” -In his Saheeh Sunan al-Nasaai, he declared it authentic (saheeh). -In his Daeef al-Jaami’ he graded it weak (daeef).

Some of the learned followers of the Shaykh already know this. Once, one of them was reminded that he claimed Shaykh Albani declared a particular hadith authentic. He was then asked if he was sure if indeed that was the case; here‘s what he said: “Well, I have looked it up in Saheeh al-Jaami’ and Shaykh Albani (may Allah have mercy on his soul) graded it as hasan (fair). I don’t know if he graded it as weak elsewhere.” If this is the behaviour of some of his learned followers, what are the ordinary people to do when Shaykh Albani disagrees with himself? In this booklet over 200 examples are given which illustrate how the Shaykh contradicted himself. God willing, more examples will be added in subsequent editions of this booklet. 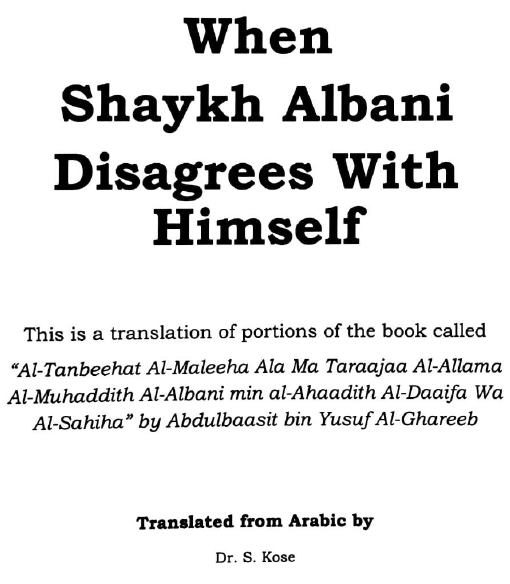