In this special treatise by Dr. Abul Hasan Hussain Ahmed, a newly discovered Hadith from the well known Sahabi, Jabir ibn Abdullah (ra) has been mentioned with a systematic and detailed analysis of its authenticity probably for the first time in the English language.  The narration in question being as follows and as mentioned in a unique work from the Hadith genre known as al-Mashyakha al-Baghdadiyya by the famous Hadith scholar, al-Hāfiz Abu Tahir al-Silafi (d. 576 AH):

and prayed with the people 24 raka’ts.”

The figure of 24 rak’ats refers to four rak’ats of Isha prayer followed by twenty rak’ats of Tarāwīh, which was all prayed in congregation on those few nights that the Prophet (صلی اللہ علیہ وسلم) actually lead Tarāwīh in congregation.

In addition to the above narration which is also found in a work known as Tā’rikh Jurjān by al-Hāfiz Abūl Qasim Hamza Ibn Yusuf al-Sahmi (d. 427 AH), the well known narration from the Sahabi, Abdullah ibn Abbas (ra) has also been analytically reviewed.  The latter narration being as follows with the wording recorded in the Musannaf of Imam Abu Bakr ibn Abi Shayba (d. 235 AH):

“The Prophet (صلی اللہ علیہ وسلم) would pray in Ramadan 20 rak’ats and the witr.”

The above narrations have been presented within this work with reference to the actual manuscripts and their images have also been included for the benefit of the keen minded researchers.

The following diagram is a representation of the chains of transmission (Asānid) that were discussed in a thorough manner within the treatise: 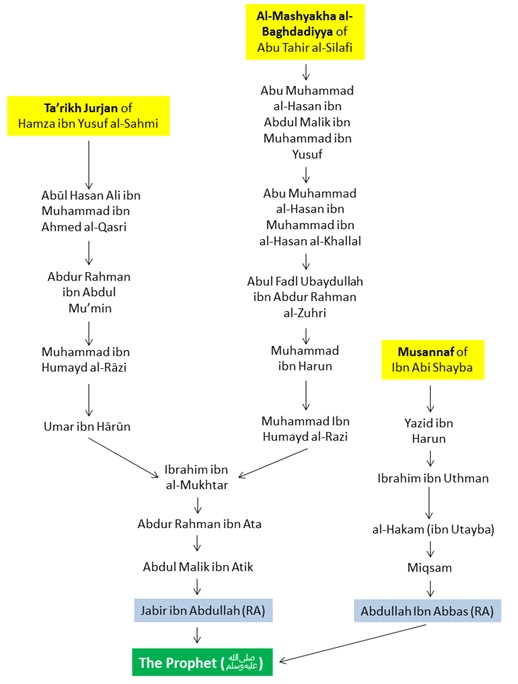 Is Salatul Taraweeh 8 or 20 rak'ats in Ramadan?

The Fiqh of Eid al Fitr

Proofs for the Hanafi Procedure of Salat al-‘Id