This is a translation of Nur al-Idah, A Classical Manual of Islamic jurisprudence.  It was translated from the Arabic with Commentary and Notes by Shaykh Wesam Charkawi.

Nur al-Idah is principally a Hanafi text which includes vast areas of jurisprudence, namely, the rulings pertaining to worship. It leaves the student or general reader well prepared to deal with the majority of matters ranging from purification, prayer, funerals, zakah to hajj. It reveals in a small way as to why the Hanafi Madhhab is held in such high esteem from scholars all over the world. It is practical, sensible and can be used as a reference book. This book is based on the teachings of Imam Abu Hanifa (d. 150 AH) and his students, namely Imam Muhammad, Abu Yusuf and Zufar; and it will provide the reader with a brief look as to why the Hanafi Madhhab is the most widely embraced in the world today and in Islamic history.

The translation of Nur al-Idah is displayed in bold while the commentary and explanation, the majority of which is from Maraky al-Falah is written in plain text. It has been the translators attempt to prepare the text of Nur al-Idah in a manner that can be read independently without reading the commentary. However, commentary is essential for further explanations of the actual text and for this reason it entails views from other Hanafi sources such as al-Ikhtiyar and al-Hidayah, as well as the position of other schools, such as the Shafi’i Madhhab. This is intended to give the reader a broader perspective on matters and demonstrate the similarity between the various schools of thought.

Referencing the text with evidence, namely, with Qur’an or hadith has been given on most issues and that areas where it is not, is either due to qiyas (analogical reasoning) or because of its unanimous agreement on that particular issue. A translation may simplify many things, though this will still require the complete and concentrated attention of the reader.
————
First page of an original manuscript of Nur al-Idah dated 1205 AH as located in al-Azhar University manuscript library in Cairo, Egypt: 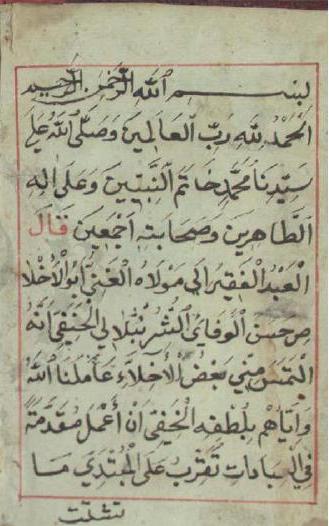 A short biography of Imam al-Shurunbulali is available here

DISCLAIMER – The digital version of the book was not produced by this website but located in the public domain via the internet due to some one else’s efforts.

Course: Understanding the Attributes of Allah